I started carrying Basho on my third walking day. I had had a difficult evening and I needed something to get into a different state of mind. In case you don't know: Matsuo Basho was the most famous poet of the Edo period in Japan. He is known as the master of haiku. He made a living as a teacher, but renounced the social, urban life of the literary circles and was inclined to wander throughout the country, heading west, east, and far into the northern wilderness to gain inspiration for his writing. His poems were influenced by his firsthand experience of the world around him, often encapsulating the feeling of a scene in a few simple elements.

Basho was popular on our Sideways walks. Many wayfarers carried him, letting his poems guide their minds along unexplored paths while their feet walked along the designated route.

In Turnhout our feet rested for three days. During the festival the Walking Librarians distributed 10 books around the festival terrain of the Klein Engelandhoeve. Every book had a connection with the location it was placed in. "After the car" was located next to the busy road. Nan Sheppard's "Living Mountain" on top of a huge pile of branches. "Travels with a donkey" in the field with our animal walking companion Biegel, etc. We took people along the route and read from the different books. I had put Basho on some stones next to a green pond.

When by the end of the day I checked if all the books were still there, Basho was missing. I looked around to see if somebody had taken the book to read it but couldn't find it. Then something caught my eye. There it was. On the ground. Placed under the leg of a table to level it.
I was upset for five seconds. Then I heard Basho laugh. And I laughed with him. 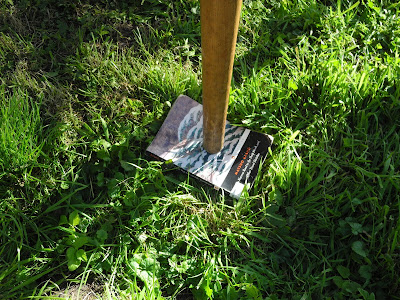 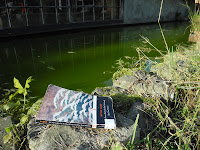 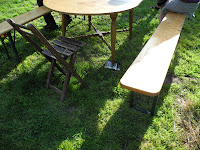