“Destiny guides our fortunes more favorably than we could have expected. Look there, Sancho Panza, my friend, and see those thirty or so wild giants, with whom I intend to do battle and kill each and all of them, so with their stolen booty we can begin to enrich ourselves. This is nobel, righteous warfare, for it is wonderfully useful to God to have such an evil race wiped from the face of the earth."
"What giants?" Asked Sancho Panza.
"The ones you can see over there," answered his master, "with the huge arms, some of which are very nearly two leagues long."
"Now look, your grace," said Sancho, "what you see over there aren't giants, but windmills, and what seems to be arms are just their sails, that go around in the wind and turn the millstone."
"Obviously," replied Don Quijote, "you don't know much about adventures.”
(Miguel de Cervantes Saavedra, Don Quixote de la Mancha) 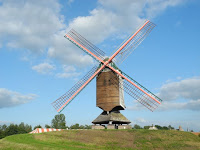 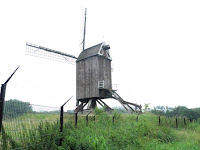 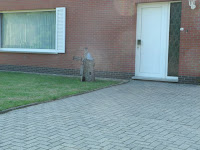 Before I had left home Cervantes had fought with Calvino and Calvino won. I brought Invisible Cities and not Don Quixote. But there it was, on my first walking day. I didn't know what to think, I didn't think until on my second walking day there was another one, ridiculously small, as if it wasn't real. The third day I was waiting for it and it wasn't until at the end of the walk that this majestic specimen suddenly rose out of the earth. There was a circus tent behind it. I could only stare at it in awe. The fourth day I searched the landscape for  a windmill but there were only trees and houses. There were clouds and birds and people and wind but not a single windmill. At the end of the fourth day I sewed a windmill on the inside of my waistcoat. As I did on the fifth day and the sixth and the seventh, every day until the last day.

On this last day I gave my sunglasses away. They had accompanied me since the day I saw my last windmill (I originally wore a different pair but they fell in the Albert Canal). I gave them to a man who had travelled all the way across Belgium with a donkey. He took them to Barcelona so they could see the sea. 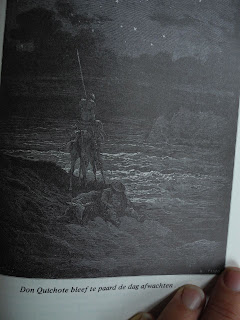 (Don Quixote looking at the sea near Barcelona, awaiting the day. "They beheld the sea, a sight until then unseen by them; it struck them as exceedingly spacious and broad." Engraving by Gustave Dorée)
Gepost door monique besten op 00:49