About being donkey eared


Something which we know must be dawn -
A different darkness, flowed above the clouds,
And dead ahead we saw, where sky and sea should meet,
A line, a white line, a long white line,
A wall, a barrier, towards which we drove.


When I look up, I realize the stars have faded. It is silent at farmer Frans´ farm. Five ´o clock, all the animals are still asleep. I´m the only one left at the final Sideways location. I just came back from a night walk, still wearing my suit. My pockets are empty though. I walked tonight with these 5 lines, T.S. Eliot wrote them for The Waste Land, which is considered to be one of the greatest poems in the English language. They were never printed though, since his friend and editor Ezrah Pound convinced him to take them out.

I only took one book from the Walking Library. I will return it in due time when I will fulfill my last duties as a Walking Librarian. It is Calvino´s "Le Città Invisibili", Invisible Cities, the book I suggested when Dee, one of the two head librarians, asked me what book I would take on a trip if I would be allowed to bring just one book. It got stained and torn in the last four weeks. A lot of people have read it. It is dog eared, which in Belgium and Holland is called "donkey eared". I´m planning to reread the pages with the stains and folded corners. I won´t necessarily read the words though.

Marco Polo describes a bridge, stone by stone. "But which is the stone that supports the bridge?" Kublai Kan asks.
"The bridge is not supported by one stone or another," Marco answers, "but by the line of the arch that they form." Kublai Khan remains silent, reflecting. Then he adds: "Why do you speak of stones? It is only the arch that matters to me."
Polo answers:"Without stones there is no arch."

I didn´t write much in the last two weeks. One of the first things I lost during my walks was the fountain pen I brought from home. My favorite one. It is the second item in the list that is embroidered in the inside of the waistcoat, inside my three piece walking suit which by now contains two weeks of memories in the shape of words and drawings. There are about 10 other items in the list. Most of them I retrieved, my ring, the blue cap, my left walking stick, my dinner card. My sunglasses fell in the Albert Canal which made sense. But I don´t remember where and when I lost my fountain pen, which is the only thing I regret about the loss. I like to think about my lost objects and remember the place where I saw them last.

Yesterday I made my first solitary walk. Something was missing, although I´m not sure what it was. I could´t have changed from a solitary walker into a social walker (whatever that is) in two weeks, could I?
I saw traces everywhere. I saw the broken ceramic tiles Amelie collected. I saw a pond that would have been perfect for Simon´s boat object. I heard a woodpecker using Claudia´s laughter. I saw leaves as yellow as Yana´s dress.
I didn´t see any donkey traces but the donkey pace is still there, in my feet. It is the only thing I hope not to loose.

What is the connection between foot and tongue?

Somebody posed this question during the symposium "Walking on" on Saturday.
Are my words, your words, our words, like steps? Is moving through a book similar to moving along a road? Before Sideways I might have said yes. Now I realise there is a big difference. On the road the people you meet are real. They have their own words. It is like Marco Polo says:

It is not the voice that commands the story: it is the ear.

Somebody else said there were no stories in the last weeks. There was just the walking. I tend to disagree but I´m not sure. It all comes back to determining what it is, a story. What it is, a walk.

Do stories need to be told in order to be heard?

Is the walking the only true story? Is it the traces lost and found?

As every reader knows, the point, the essential quality of the act of reading, now and always, is that it tends to no foreseeable end, to no conclusion. Every reading prolongs another, begun in some afternoon thousands of years ago and of which we know nothing; every reading projects its shadow onto the following page, lending it content and context. In this way, the story grows, layer after layer, like the skin of the society whose history the act preserves.

(Alberto Manguel, Into the looking-glass wood. Essays on books, reading and the world. p. 272)

When Claudia interviewed me and asked about a special moment I told her the story of Simon and the donkey.
I was walking with books in my pocket and Simon came up to me to ask for a book to read while walking. A book, any book. I took a random book out of a pocket, "Travels with a donkey in the Cévennes" by Robert Louis Stevenson. Simon opened the book somewhere in the middle and started reading out loud. He read how Stevenson woke up one morning early and was overwhelmed by the nature surrounding him. He looked around him and saw the donkey. During the early morning hours he had walked a seemingly perfect circle in the grass.
Simon looked up from his the book with amazement and said that the exact same thing had happened to him just that morning.

A few days later, during a reading in the Walking Library at Zutendaal, I told the audience Simon´s story. I tried to find the quote in Stevenson´s book, but I could´t find it. I tried again later, going through the book for over an hour without a result. 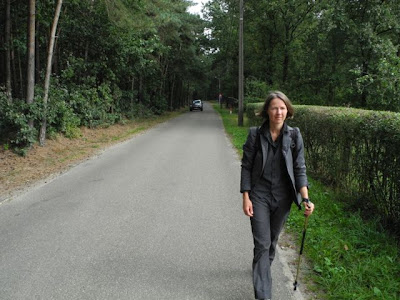